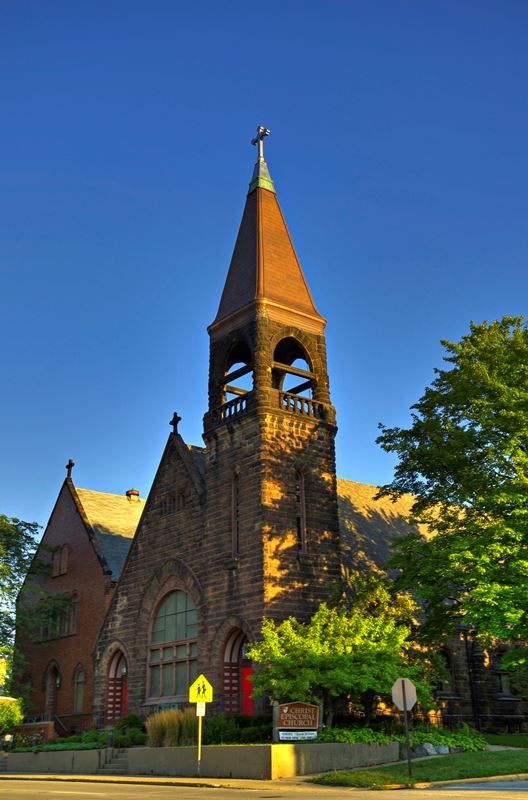 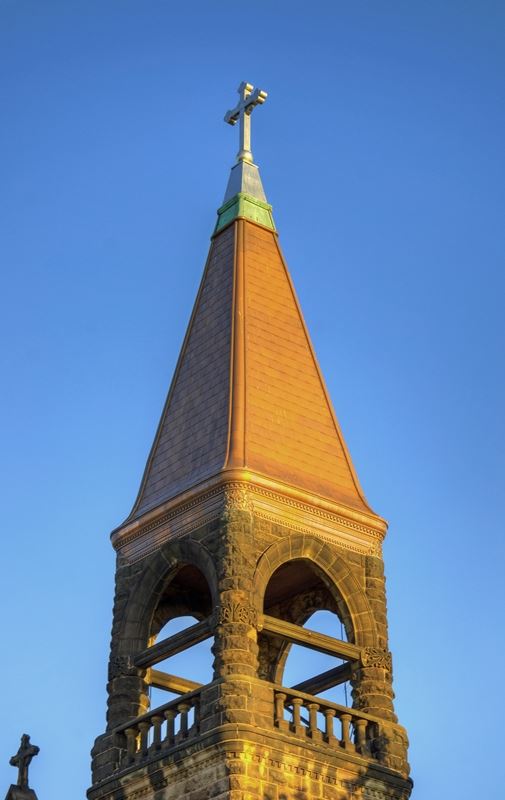 The first Episcopal service in Little Fort (now City of Waukegan), Illinois occurred in February 1845 when Fr. Isaac Hallom, Rector of St. James Church, Chicago traveled to Little Fort where he read vespers, preached and baptized an infant child of Irish immigrants. The formal organization of Christ Church began on February 7, 1846. Various locations served the church's needs until the construction of a permanent building at Grand Avenue and Martin L. King, Jr. Avenue in 1850. At the time, this was the north side of Waukegan. On March 31, 1849, the residents had changed the name of Little Fort to Waukegan. Bishop Philander Chase consecrated the first church building on May 13, 1851.

The present church, built in 1888, is Richardsonian Romanesque architecture with Gothic features - pointed arches over the doorways, large front window and openings in the bell tower. The bell tower rises 120 feet and houses one eighteen-hundred pound bell cast in Troy, New York. The church was designed by the Chicago architectural firm of Edbrook and Burnham. It was completed at a total cost of $33,741.67 through special gifts and memorials. Beautiful stained glass memorial windows adorn each side of the church. The large front window, known as the baptismal window, depicts Christ and the children. The pews are oak with cherry trim. The church's exterior is Carbondale brownstone. Bishop William G. McLaren consecrated the structure on January 31, 1889.

The Parish House, constructed in 1903 to meet the growing needs of Christ Church and the Waukegan community, serves as the administration building and fellowship hall. Christ Episcopal also has a beautiful chapel attached to the main church, The Chapel of Our Lady, which has been described as a Gothic gem. The chapel was completed in 1914 and was dedicated by the Right Reverend Charles Palmerstone Anderson, D.D., Bishop of Chicago, on Sunday, December 11, 1915. The 28-foot by 63-foot chapel seats 60 and was designed by architect Harry Mace of Evanston. The golden oak altar was carved by John Lang, son of the famed wood carver of Oberammergau, Germany, Alois Lang. The stained glass triptych window behind the altar was imported from England. The chapel is considered to be one of the best examples of perpendicular Gothic design in the northern Chicago metropolitan area.

In the span of 161 years, twenty-five rectors have served Christ Church, two of whom served twice. The first rector began serving on October 1, 1846; in the ensuing thirty-five year period, the first fourteen rectors had completed their years of service. On October 1, 1881, the fifteenth rector was called to the parish. During the next 126 years, only eleven rectors served Christ Church. Of these, three were long-term incumbents: one becoming the first Bishop Suffragan of the Diocese of Chicago; the other two continuing on in the capacity of Rector Emeritus, one of whom also served as Honorary Canon for Saint James Cathedral in the Diocese of Chicago.