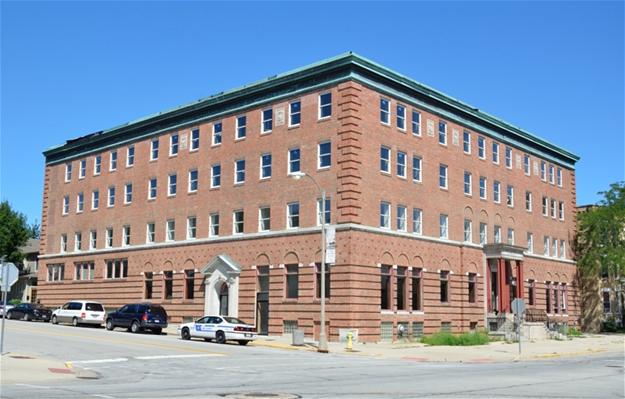 The Waukegan YMCA Building at 204 N. County Street has been a significant contributor to the daily life and history of the City of Waukegan, part of the local architectural tradition, as well as a representative example of the YMCA buildings built in the 1920's.

The building at 204 N. County St. was not the original home of the Young Men's Christian Association in Waukegan, but it was the first building built expressly to house the YMCA. Before that, the organization met at the Hope Building at Clayton and Genesee, starting around 1911, and also much earlier in the Blumberg building over the Grand poolroom on Washington Street in 1892 during a shortlived start to the Waukegan YMCA.

The major source of funding for the new building came from $100,000 from the Army-Navy Committee of the International YMCA, due to its work with serviceman. This was part of a large wave of funds for new YMCA buildings across the nation. The property at County Street and Clayton was bought in 1923, and the building was completed in 1924-25. The building was designed by Shattuck and Layer Architects of Chicago. The plan was based on a standard program for YMCA's at the time, providing housing for single males, and a facility for adult education, sports and recreation for the community. These worked to further the major aims of the YMCA, "The improvement of the spiritual, mental, social and physical condition of young men." Hotel-like rooms with bathrooms down the hall, called dormitories or residences, were designed into every new YMCA building, and would continue to be until the late 1950s.

The façade of the building was representative of the time period in which it was built, using traditional elements in a relatively vernacular interpretation. Significant features include the heavily detailed brick veneer façade, including quoins, corbeled banding, and false arched windows. The main entrances to the building have pedimented porch roofs. There have not been any major alterations on the exterior, though some of the first floor doors and windows have been replaced with non-matching units. The upper 6 over 1 windows are still original. The original lettering also endures, proclaiming it to be the Young Men's Christian Association.

From the 1920's through the 1980's, activities at the YMCA building were a significant source of community for the City of Waukegan. The popularity of different activities changed over the years. For instance, during the 1920's, popular activities included Americanization classes, bicycle racing, tennis, and the learn-to-swim program. After both World Wars, ex-GI's filled the dormitories as they tried to re-start their lives in a new town. Swimming lessons continued to be popular for all ages.

The YMCA continued to be a core part of the community, with programs changing with the times. However, over the next 50 years, the clientele at the dormitories also changed, from primarily ex-GI's to down-and-out males who drew increasing complaints from the downtown neighborhood and parents of young children who wished to participate in YMCA programs. Furthermore, the City of Waukegan cited the YMCA for multiple electrical and fire code violations which would have taken hundreds of thousands of dollars to repair. The YMCA board made the difficult decision to close the residence portion of the facility in 1979. The other programs were kept open until 1987, when a new YMCA building was built at 2000 N. Western Avenue in Waukegan. The building had become too expensive to maintain, especially considering that a large portion was not being used.