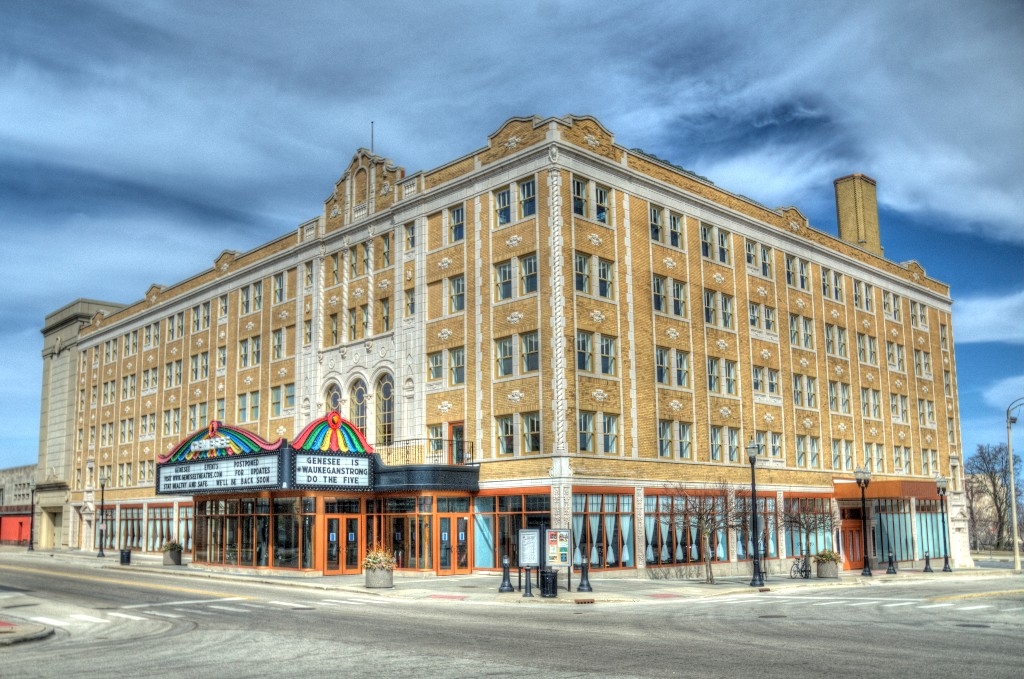 The vision of three Waukegan men, A.L. Brumund, H.C. Burnett and D.T. Webb, the Genesee Theatre was an impressive venue for its times. Using land purchased from the YMCA for $130,000 and enlisting the help of Chicago architect Edward Steinberg and Waukegan contractor Alva Weeks, the Genesee Theatre was constructed for around $1 million. Not just a movie house capable of features, music and live entertainment, but also consisting of forty apartments and retail space; the Genesee Theatre facility served as a community center for the people and a justifiable beacon for the thriving city of Waukegan.

Truly incredible, the 1,799 seat Genesee was adorned with 1,200 yards of lush tapestries, seven tons of marble and a massive Barton Grande pipe organ. In addition, no expense was spared on the modern fireproof construction, and $100,000 heating and cooling system. Originally scheduled to open Thanksgiving, the Genesee Theatre premiered to the public on December 25, 1927 to rave reviews.

The Genesee Theatre ran a regular schedule with new features every Sunday, Monday, and Thursday, only slowing operation once due to a coal shortage in 1946. The theatre boasted the first talking picture in Waukegan with the "Lion and the Mouse" in October 1928, in addition to facilitating two world premieres: Jack Benny’s 1939 "Man About Town" and "The Navy Way" in 1944. The Genesee also provided numerous other activities for the community including cooking schools, fashion shows and weddings. October 1982 saw the last first-run picture at the Theatre, and the Genesee finally closed its doors for good in 1989.

After sitting vacant for twelve years, the Genesee Theatre began its $23 million renovation in July of 2001 as part of the City of Waukegan’s downtown renovation project. With the help of over 120 volunteers, the Genesee was brought back to its original splendor. Every care was taken in the restoration to ensure the integrity of this great venue. All wall fabrics in the facility are exact replicas of the original wallpaper and coloring in the facility has been recreated as exactly as possible based on existing paint chippings. Many of the original plaster moldings, wooden railings and light fixtures have been kept intact. The marquee, installed on September 2, 2004, is an exact replica of the one which graced the Genesee in 1927.

Now an 115,000 square feet state of the art facility, the Genesee has expansive lobbies and lounges, stage size has been doubled and a balcony expansion has raised seating capacity to over 2,400, making the Genesee Theatre one of the largest facilities of its kind in the region. In addition, to ensure that there is no question to the splendor of this facility, a one-of-a-kind, 18 foot, Baccarat crystal chandelier has been added to the grand lobby. The chandelier, which originally hung in Seattle’s Orpheum theatre, is valued at $350,000 and weighs 2,200 pounds, includes thousands of pieces of crystal and features gold plated sconces. Kept in boxes since 1967, the chandelier was sold for only $100,000 to the Genesee Theatre by Mr. Louis Bianchi, and the remaining $250,000 was donated to the renovation efforts.

The Genesee Theatre re-opened its doors on December 3, 2004 to two sold out performances of Bill Cosby, and will continue to provide the highest quality of performances including comedians, Broadway productions and national and regional musical acts.