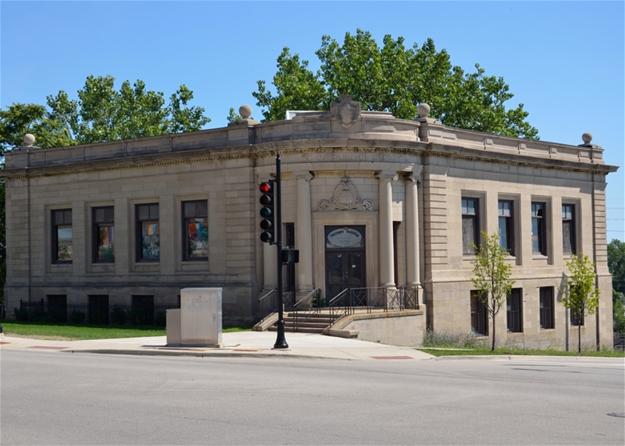 On February 27, 1901, Mr. A.K. Stearns, publisher of the Waukegan Daily and Weekly Sun and a member of the Waukegan Library Association's board of Directors wrote to Andrew Carnegie requesting $25,000 "to build us a stone building which would be both a monument to your own benevolence and a guiding post in the lives of the sons and daughters of our great industries" - a library.

Nine days later, March 8, 1901, Mr. Carnegie's secretary James Betram replied that if the City would furnish a suitable site and support the library with tax money equal to ten percent of the gift, Mr. Carnegie would give $25,000 for the building. The City Council passed an ordinance on March 18, 1901 for the annual tax to maintain the library and secured the site on Sheridan Road by having an heir to Oliver S. Lincoln amend Lincoln's deed to allow the property to be used as a library. In 1903, the city requested and received an additional $2,500 from Carnegie to sink the library's foundation 30 feet.

Andrew Carnegie gave more than $56 million between 1881 and 1917 to build 2,509 library buildings throughout the world and Waukegan's Carnegie Library is one of 105 built in Illinois with Carnegie funds and is rather unusual because of its location on the bluff. It was one of the first Carnegie libraries designed by the Chicago architectural firm of Patton & Miller. Normand S. Patton designed the Chicago Academy of Sciences building and his firm went on to design at least fourteen other Illinois Carnegie libraries as well as numerous other libraries throughout the Midwest.

The Carnegie Library building was continuously used as the public library for the City of Waukegan until 1965 when the library relocated to a new, larger building at its current location on County Street. The Carnegie Library was used by the USO and at various times for other community activities in the following years but generally fell into disrepair. Now the City is trying to restore the building and adapting it for new community uses.

In early 2013, Hector Escobar, a life-long resident of Waukegan and a graduate student at Loyola University, decided to nominate the Carnegie Library for the National Register of Historic Places as part of a class project. And although many of his fellow students decided on places or districts in Chicago, Hector chose to do a site in Waukegan "because of its rich history." While there is already a multiple property listing for sixteen Carnegie Libraries in Illinois, Hector hoped to add Waukegan's Carnegie Library to that list. With the help of Ty Rohrer, Museum Supervisor at the Waukegan History Museum, Hector was able to begin the research process. Well, Hector's research paid off. And in 2014, the Carnegie Library was added to the National Park Service's National Register of Historic Places. Visit the National Park Service's Carnegie Libraries page for more information.