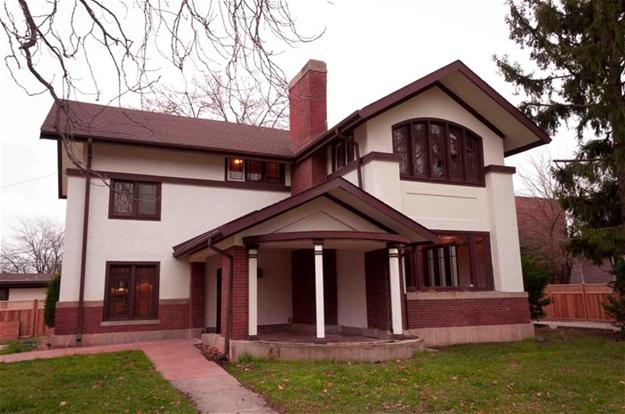 The Joseph P. Arthur Residence is a rare example of the Prairie style of architecture in Waukegan. The use of stucco, the emphasis on the horizontal line, heavy overhanging eaves, corner piers, broad chimney and shallow pitched roofs are all elements of the style presented in this design. In addition, the residence contains many excellent examples of Prairie style casement and leaded-glass windows. The plan of the residence is cruciform, addressing its corner lot location and providing for prominent elevations facing both Genesee Street and Cory Avenue. The property also includes the original garage executed in the Prairie style with a slab roof and stucco cladding.

The residence was built for Joseph P. Arthur, who with his brother Charles, co-founded the Cyclone Fence Company, a highly-successful business which operated for many years along the lakefront. It became the world's largest manufacturer of ornamental fencing and gates and by the 1910's employed over 125 men. Joseph P. Arthur served as President and General Manager. In 1917, Arthur sold the residence to the Honorable Claire C. Edwards, a judge of the 17th Judicial District. In 1936, the house was purchased by the YWCA, which made various alterations to accommodate its new function, while preserving the basic architecture of the structure. It was acquired by Shimer College in the late 1980's and was known as Prairie House, containing offices and spaces for student and faculty functions. In 2010, it was sold to a private developer who restored the building back to a single-family residence that was rented out until it was sold in 2016. It is now owner-occupied where the meticulous detail of the interior has been restored and maintained, including the ornate stained-glass bi-folding doors of the great room.

Thomas Eddy Tallmadge (1876-1940) and Vernon Spencer Watson (1878-1950) were prominent and prolific architects in the Chicago area during the first decades of the 20th century. The architects met while working in the office of D.H. Burnham and Company (which had been responsible for the planning of the World's Columbian Exposition of 1893). In October 1905, the two left the Burnham company and opened their own firm, which operated for thirty-one years and produced over 250 buildings. They designed many Prairie style residences in the Chicago area, including a significant number in Evanston and Oak Park, with Watson being the primary designer in this style. In the 1920's and 1930's, as the Prairie style fell from favor, they turned to ecclesiastical architecture, and designed a significant number of churches in the Gothic style. One of their last large-scale commissions was the design of the Colonial Village at the 1933 Century of Progress Exposition. The partnership was dissolved when Watson retired in 1936 and Tallmadge opened his own practice.

The Joseph P. Arthur Residence is an excellent example of the Prairie style of architecture which developed at the turn of the century, with Frank Lloyd Wright being its leading proponent. The architectural firm of Tallmadge & Watson was one of a small number of firms known for their ability to produce beautiful and distinctive residences in the style at a reasonable cost for their clients. This residence still clearly displays the trademark features of its design and style, and has become a distinctive part of the architectural fabric of the city. As one of the very few examples of the Prairie style standing in Waukegan, it is worthy of landmark status to ensure its careful preservation in the years to come.