The Robert A. Conolly Residence 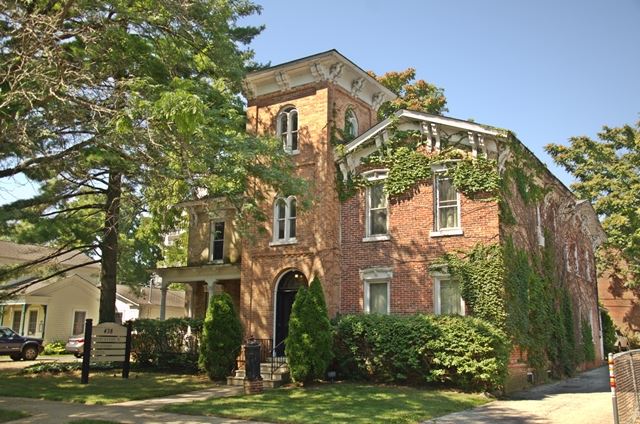 Located in the recently designated Shimer Historical District,  The Robert A. Conolly residence began its life as a two-story brick Greek Revival home in the mid-1840's. In 1871, that house was incorporated into a new and much larger residence for Robert A. Conolly, designed in the then fashionable Italianate style, modeled after Italian villas. The house features a prominent three-story central tower, at the base of which is found the main entryway with a pair of original paneled doors and stained-glass transom surrounded by wood rope trim. Robert A. Conolly owned an 82-acre wooded lot, which now forms part of the Shoreacres Country Club in Lake Bluff. The front doors of the house were made from trees taken from this lot. The tower features large arched openings at each level with a pair of arched windows set within. To the north of the tower is the original section of the house, two stories in height which was improved with pairs of elaborately carved brackets under the eaves. To the south of the tower is a two-story section with a one-story porch featuring elegant Corinthian columns and a bracketed cornice, which is also repeated in the adjacent one-story bay window facing south. Tall double-hung windows across the façade, with glass imported from Europe are topped with decorative bracketed pediments. The house is built of double brick walls with an air space in between.

Robert A. Conolly was born in County Donegal, Ireland in 1830 and immigrated to the United States with his parents in 1834. In 1852, he came west "seeking his fortune" and ended in Chicago, where he secured a position as a civil engineer with what was then known as the Chicago & Northwestern Railway. He was employed on the survey of the road from Chicago to Milwaukee passing through Waukegan. He was also a contractor on the construction of the road, and supposedly was criticized for building the finest of the railroad stations in his new hometown of Waukegan. Other projects in which he was involved were the construction of the first water intake cribs at Chicago, the extensive iron-ore docks at Escanaba, Michigan and the plan for the City of Holland, Michigan.

In 1861, Robert A. Conolly was married to Harriet Ballentine, daughter of David Ballentine, early mayor of Waukegan. They had four children, including Robert B. Conolly, who later served as city clerk, police chief and state deputy fire marshal. Grandson Richanrd Lansing Conolly, born in 1892, had a distinguished career in the Navy, achieving the rank of Admiral. In 1978, a destroyer was named in his honor, and plans are currently underway to try and bring this decommissioned ship to the Waukegan Harbor as a museum. Another grandson of Robert and Harriet Conolly was John Hamilton Conolly, who served several terms as a state representative, living in the old Ballentine house which stands at 837 N. Sheridan Road. The residence currently houses a private law firm.