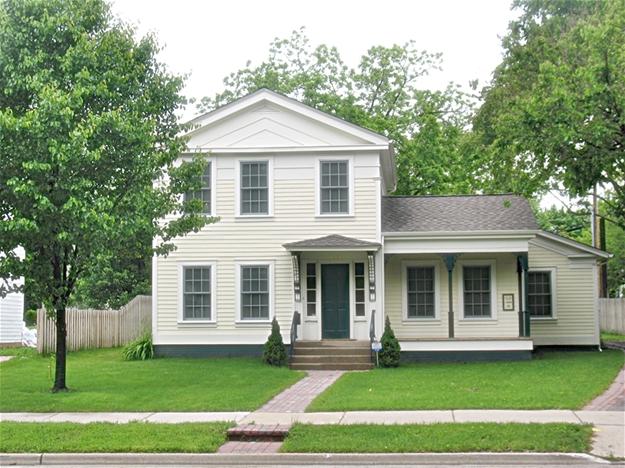 The Welcome Jilson Residence is a classic example of the Greek Revival style consisting of the main two-story section surmounted by the traditional Greek pediment, and a one-story wing to the north. An overhang above the main entrance is supported by a pair of elaborately carved brackets, the style of which suggests that this alteration was made during the 1860's. Later changes to the house made after 1950 including the cladding of the house in siding, adding an attached garage to the north end, and removing the porch in front of the one-story wing. These changes, easily reversible, do not detract from the overall massing and detailing of the building.

The residence was built for Welcome Jilson, another of Waukegan's earliest settlers. Jilson was born in Oneida County, NY in 1811 and moved west to Kenosha with his wife Cordelia in 1843. In May 1844, they located to Waukegan where they took up permanent residence. Jilson originally worked as a school teacher and taught at the first school in Antioch in 1843, a small room over a store. In later years, he worked primarily as a painter. He died in December 1889.

Cordelia Jilson was an important founding member of the local Baptist Church. In the history of the church, it states that Reverend Peter Freeman was sent to Little Fort to establish a church and "the first task of the pioneer preacher was to seek out a Mrs. Cordelia Jilson who had recently moved here from Mount Morris, New York, and was known as a Baptist. Mrs. Jilson was found and enlisted as a charter member of the Church, where she remained a faithful member for more than fifty years." She remained in the house until her death about 1904.

Through the approval of three Certificates of Appropriateness by the Historic Preservation Commission, the current owner has been able to restore the residence from its previous state as a converted three-flat residence, to its current state as a single-family residence. See the before and after photos at the link below. The first phase of the restoration included the removal of the attached garage on the northeast side of the residence and a shed roof addition on the southwest side of the residence. Neither of which were original to the building. The first phase also included the removal of all exterior asphalt sheathing covering the original clapboard and repair and replace original clapboard with identical materials. All of the vinyl replacement windows were removed and replaced with appropriate six-over-six divided light windows. The original decorative porch to the north of the front door was restored with the addition of appropriate windows on the east wall, columns for the porch and decking. A newly-discovered covered porch on the rear of the house was also restored with Greek revival Doric columns. The exterior was then finished with historically accurate colors appropriate for Greek revival architecture. The door and Italianate embellishments were painted a dark forest green.

View Before and After Photos