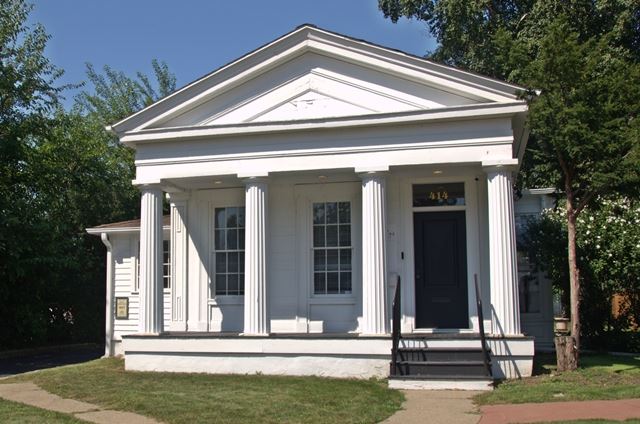 The Swartout Residence is the quintessential Greek Revival frame structure, featuring a temple front consisting of a series of four Doric columns supporting a classical pediment. The façade is further enhanced with tall "six-over-six" windows, pilasters with Greek bandwork, and a classic entryway with transom above. It was built for John H. Swartout, a 30-year old carriage maker who emigrated from New York to Little Fort (Waukegan). He was one of the charter members of the Baptist Church when it formed in 1846, and served as trustee of the Village of Little Fort (Waukegan) in 1850.

In 1857 it was sold to Mary Ann Peterson, who added a large rear addition the following year, more than doubling the size of the house. In 1864, it was sold to Mrs. Sylvia Newcomb who added the fashionable Italianate style bay window to the north side of the house in 1877. Following her death in 1891, it was left to her niece, Mrs. W.G. Hardie, and she and her husband remained there for several decades.

In 1934, the house was extensively documented by the Historic American Buildings Survey (HABS), a project of the U.S. Department of the Interior. Detailed drawings of the exterior, floor plans and decorative details were executed by trained architects, in addition to photographs and written documentation. The HABS Advisory Committee stated that the house "possesses exceptional architectural interest and as being worthy of most careful preservation for the benefit of future generations." These records remain a part of the HABS collection on file at the Library of Congress in Washington, D.C. The residence took on additional prominence when it was featured in the 1949 book, Old Illinois Houses by John Drury, who referred to the building as a "miniature Parthenon" and praised it as "a distinctive example of the Greek Revival style of architecture in America."

In 1981, the house was purchased by the Waukegan/Lake County Chamber of Commerce, then subsequently acquired by Shimer College in 1993. Shimer College then sold it to a private investor who then sold it in 2017 to Genaro Mendez who uses it as an insurance agency.