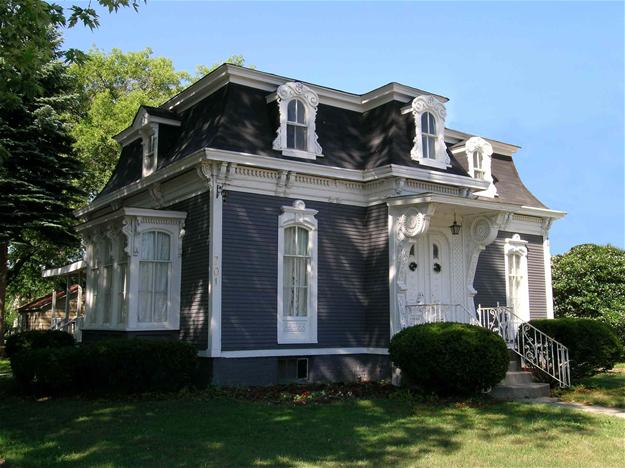 The house at 701 Grand Avenue is an extraordinary example of the Second Empire style of architecture. Based on the architecture of the Second Empire era in France, the most prominent feature of the style is the steeply sloped mansard roof. Houses built in this style were typically three-stories in height; this example is somewhat unusual in that it only rises two stories. The house was built about 1866 for Charles T. Dickinson, an architect/builder working in the Waukegan area. This may account for the unusually elaborate trim and ornament. Not only would Dickinson have paid special attention to his own personal residence, the building would have served as an example of his skill as a designer and builder, showing potential clients the level of artistry he was capable of achieving.

Notable features of the façade include the tall elaborately framed windows, the intricate dormers and the broad cornice with paired brackets and dentil trim. The most significant feature of the house however, is the amazingly detailed entryway. A pair of monumental wooden brackets in the shape of the letter K, flank the doorway and contain numerous carved details. The tall arched doubled doors are massive and heavy and decorated with further carved motifs. The house retains an incredibly high degree of architectural integrity.

Dickinson sold the house by the 1880s and it became the residence of the Nichols family until the turn of the century. After passing through several owners, it became the home of Frank Klann in the mid-1920s and he remained until the late 1960s when it was acquired by Paul Wilhelm & Associates, a real estate firm. It returned to single family use after they sold the property.

The house is a significant survivor of the period when elegant and gracious homes such as these lined Grand Avenue. In spite of early additions to the back end of the structure, the home has survived largely intact, including original wood siding and trim. As such, it is a rare and important example of the building period which followed the Civil War in Waukegan.